Review of the best omega 3 supplements!

Omega 3 Supplements...
Are They the Cure for Heart Disease?

Omega 3 oils are truly super hero heart health and brain nutrients. Hardly a day goes by without reports of another health benefit. A short list follows:

Key omega-3 fatty acids include eicosapentaenoic acid (EPA) and docosahexaenoic acid (DHA), both found primarily in oily cold-water fish such as tuna, salmon, and mackerel. Aside from fresh seaweed, a staple of many cultures, plant foods rarely contain EPA or DHA.

A third omega-3 oil called alpha-linolenic acid (ALA), is found primarily in flaxseed oils, dark green leafy vegetables and certain vegetable oils. Although ALA has different effects on the body than EPA and DHA do, the body has enzymes that can convert ALA to EPA. All three are important to human health.

What if we don't get enough omega 3 oils?

Researchers have found that without a sufficient supply of polyunsaturated omega-3s, the body will use saturated fat to construct cell membranes. The resulting cell membranes, however, are less elastic, a situation that can have a negative effect on the heart because it makes it harder to return to a resting state.

Although the body needs both omega-3s and omega-6s to thrive, most people consume far more 6s than 3s. For this reason, many experts recommend consuming a better balance these two EFAs.

Omega 3 oils reduce high blood pressure and fish oil may lower cholesterol Studies of large groups of people have found that the more omega-3 fatty acids people consume, the lower their overall blood pressure level is. This was the case with the Greenland Eskimos who ate a lot of oily, cold-water fish.

Diets high in omega-3 fatty acids (such as fish oils) have been shown to increase survival in people with autoimmune diseases. This is probably because the omega-3s help the arteries--as well as many other parts of the body--stay inflammation free. EPA and DHA are successful at this because they can be converted into natural anti-inflammatory substances that help decrease inflammation and pain.

In numerous studies over the years, participants with inflammatory diseases have reported less joint stiffness, swelling, tenderness, and overall fatigue when taking omega 3 oils. Supplement authority Will Brink reports particularly impressive results with flax oil but fish oil should do as well or better.

In 1998 randomized clinical trials reported that omega 3 supplements were more successful than a placebo in improving the condition of people with rheumatoid arthritis. The research also showed that getting more omega-3 fatty acids enabled some participants to reduce their use of non- steroidal anti-inflammatory drugs (NASAIDs).

The human brain is made up of 60% fat and needs omega 3 oils to function properly. Researchers have discovered a link between mood disorders and the presence of low concentrations of omega-3 fatty acids in the body. The omega 3s are believed to help keep the brain's entire traffic pattern of thoughts, reactions, and reflexes running smoothly and efficiently.

Clinical trials are underway to further investigate whether supplementing the diet with omega 3 essential fatty acids will reduce the severity of such psychiatric problems as mild to moderate depression, dementia, bipolar disorder, and schizophrenia.

Interestingly, the oil used to help the child with a degenerative nerve disorder in the popular film Lorenzo's Oil was an omega 3 oil.

Preliminary research from the University of California, Los Angeles, suggests that omega 3 supplements may help maintain healthy breast tissue and prevent breast cancer. Also, in a recent study, participants who supplemented their diet with fish oils produced fewer quantities of a carcinogen associated with colon cancer than did a placebo group. More research into this exciting use for omega-3s is underway.

Although the FDA has no established recommended daily intake for omega-oils, but a healthy diet containing significant amounts of foods rich in this essential fatty acid is clearly wise.

By increasing your intake of omega-3 fatty acids, you will naturally bring the ratio of omega-3 and omega-6 fatty acids back into a healthier, 2-1 or (optimally) 1-1 balance.

Pregnant women and infants need plenty of omega-3s to nourish the developing brain of the fetus and young child. If a pregnant woman gets too few omega-3s, the growing fetus will take all that's available. This could set the stage for depression in the mother. Talk to your obstetrician and pediatrician about specific requirements.

Side Effects of omega 3 Supplements

There are no known side effects, however be sure to check with your doctor first if you are taking a blood-thinner such as warfarin or heparin.

The American Heart Association recommends that people eat tuna or salmon at least twice a week, but it is difficult to find fish that has not been raised on a farm and fed corn. This can dramatically reduce the amount of omega 3s.

All Fish Oil is Not The Same! Be sure your fish oil is of the highest quality and purity. It's important to get your omega 3 supplement from a source that has taken all the precautions to insure that it is free of contaminants.

Krill Oil is a Miracle Omega 3 Oil for Your Heart and Brain!

I'm Gene Millen, your host on this website with my wife Bernie. After my six-way heart bypass operation in 1990 I researched everything I could get my hands on to determine which supplements would reduce my risks of having a heart attack.

For many years the omega 3 oil of choice was fish oil. In recent years however, we have learned that all fish oil is not equal.

Fish oil is perishable and is subject to the environment from which it is taken. Poor quality fish oil may contain toxins, is weak in antioxidant content and may become rancid.

Oxidation and inflammation are key elements leading to the clogging of arteries in the heart and brain.

In addition to this, since nutritional supplements are unregulated Consumer Lab has reported that many products fail to live up to their advertising. 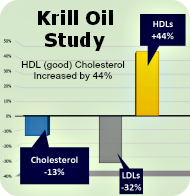 Krill Oil Comes the Rescue of the Heart and Brain!

When I first learned about the exceptional krill oil benefits and the solid research behind its combination of antioxidants, omega-3 oils and other ingredients I was very impressed.

Studies have found that krill oil works as well or better than omega-3s from other sources, yet it requires a much lower dose.

A 2007 study in the Journal of the American College of Nutrition found that 300mg daily supplementation of krill oil resulted in significant decreases in inflammation and arthritic symptoms in cardiac and arthritis patients.

Vital Life Nutritionals Krill Oil is one of the richest sources of the powerful antioxidant called astaxasthin.

And since krill is so powerful the small capsules are easy to swallow, and there's no fishy after taste!

Furthermore, an important krill oil benefit is its ability to raise our good HDL cholesterol and lower triglycerides, both of which lower risks of having a heart attack or stroke!

Krill oil is very effective at reducing hdl cholesterol and increasing the good HDLs. It has been shown in clinical studies to improve glucose levels, which is significant for managing diabetes.

Other Krill Oil benefits include weight loss and the high astaxanthin antioxidant levels included in Vital Life Nutritionals Krill Oil are thought to be beneficial for controlling inflammation, including inflammation of the cardiovascular system, the brain and joints.

"A 2007 study in the Journal of the American College of Nutrition found that 300mg daily supplementation of krill oil resulted in significant decreases in inflammation and arthritic symptoms in cardiac and arthritis patients.

I'm here to be your advisor, help you avoid the pitfalls and false starts that I have made, and guide you to the cure for heart disease.

Thanks for joining us on the journey to
Vital Heart Health for Life!