Learn Cholesterol Facts, What Causes Heart Attacks and the Cure for Heart Disease.

Cholesterol Facts That May Surprise You.

The Cholesterol Facts have been distorted for more than 50 years. Cholesterol is not the problem that we have been led to believe. .

Relying on cholesterol numbers in evaluating risks of coronary artery disease may not be wise since nearly 80% of coronary patients have the same total cholesterol as individuals who do not develop the disease."

Big Pharma hopes you don't discover the cholesterol facts before their labs have time to design a new drug to replace the millions of dollars they are raking in from statin drugs.

A cholesterol fact that is not generally known is that if your cholesterol goes too low it reduces brain function and increases your risk of having a stroke.

You may be surprised to learn that the Framingham Heart Study, a large, community-based, prospective investigation of cholesterol facts and other cardiovascular risk factors, found that those with the lowest total cholesterol levels are associated with poorer performance on cognitive measures, which place high demands on abstract reasoning, attention/concentration, word fluency, and executive functioning. 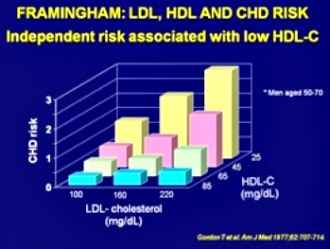 The research study concluded;"Low HDL is an independent risk factor for CAD in case-control and prospective observational studies.

In contrast, high HDL levels are associated with longevity and are protective against the development of atherosclerotic disease. In the Framingham Study, risk for CAD increases sharply as HDL levels fall progressively below 40 mg/dL."

Cholesterol Facts From the 1970's

Dr. Mary Enig is a world-renowned biochemist and nutritionist best known for her pioneering research on healthy fats and oils.

Dr Enig protested against trans fats more than twenty-five years ago. Contrary to what you often hear from the experts, saturated fat is good for us, and trans fats can kill us.

In the ongoing Nurses Health Study each 2% increase in trans fat consumption converted to a whopping 93% increase in coronary heart disease. A study published in The Lancet in 1994 showed that almost three-quarters of the fat found clogging arteries is trans fat.

In her treatise co-authored with Mary Fallon, "The Oiling of America" she relates how Gary Taubes has exposed the myths surrounding choesterol.

"The Soft Science of Dietary Fats," by Gary Taubes, in the March 30, 2001 issue of Science,exposes the shenanigans of the 1970s McGovern Senate Committee staff and the follow-on by various government agencies that gave us the anti-fat, anti-cholesterol dietary goals and guidelines.

Yes, our government representatives were getting mixed up in something they knew very little about. It brings to mind President Reagans famous quote, "The nine most terrifying words in the English language are, 'I'm from the government and I'm here to help.'"

As a youngster growing up I remember clearly waiting expectantly for the next issue of Superman to read what feats my hero would accomplish.

When it comes to saving your life HDL cholesterol is the superman that can accomplish even greater feats.

HDL cholesterol acts like a miniature hydraulic vacuum cleaner, streaming through your arteries (not quite as fast as a speeding bullet), scooping up the heart- stopping LDL cholesterol, and carrying it back to your liver where it can be delt with.

HDLs also douse the fires of inflammation. It is this smoldering inflammation and oxidation that causes the cholesterol in our arteries to turn rancid and clog our arteries.

The Great Cholesterol Myth, by Jonny Bowden, PH.D.,C.N.S and Stephen Sinatra, M.D.,F.A.C.C. is a well researched and entertaining analysis of the role of politics in promoting inaccurate conclusions from clinical studies.

"For decades, the public has been relentlessly brainwashed about cholesterol and today practically everybody thinks that cholesterol is the main cause of heart disease.

"It's not. The cholesterol story is perhaps the biggest medical con in existence. I think nothing matches it as medical hooey.

"Most physicians, unfortunately, have also bought hook, line, and sinker into the propaganda that if cholesterol reaches some artificially-established cutoff point you need a drug to lower it in order to prevent a heart attack, even if you are totally healthy, and, not to worry, the drug is really very safe to take.

"I, for one, bought into that lie big time and actually used to lecture about the importance of statins, the cholesterol-lowering drugs. I even got a paycheck from drug companies to talk up their statins.

"I stopped doing that routine years ago as I began to learn the true cholesterol facts from medical research and my own clinical observations, that the cholesterol story was more fiction than fact. I realized that the story was so skewed and manipulated that I decided to finally do something about it, and try, to the best of my ability, to educate the public."

When LDL cholesterol molecules are oxidized in our bodies by free radicals, this creates an inflammatory cascade which results in cell and artery damage and irritation of the artery walls.

The primary sources of this damage are excess sugar and omega 6 oils (such as corn oil, canola oil, soy bean and saflower) that have been processed at extreme temperatures.

More oxidized LDLs start to build up at this spot, producing an artery-blocking plaque. Left untreated, this plaque eventually closes the artery entirely, leading to a possible heart attack or stroke."

Summary of Cholesterol Facts. Cholesterol is very beneficial to our bodies and is critical for optimum heart and brain health

2. HDL cholesterol reverses this process. It acts as an antioxidant and sweeps through our heart arteries like a vacum cleaner, removing the damaged ldl cholesterol.

3. The famous Framingham Heart Study proved conclusively that those with low HDL cholesterol are at the highest risk for heart disease.

It was about 10 years ago that I first discovered a natural supplement derived from sugar cane, that I've found to be one of the best alternatives to statin drugs.

Policosanol not only lowers ldl cholesterol and increases the good hdl cholesterol...but does it without the side effects that many statin drug users endure.

At a daily dosage of 20 mg HDL cholesterol levels typically increase by 15 to 25% after two months of use.

The combined LDL reduction and HDL increase can produce dramatic improvements in the LDL to HDL ratio.

Click here to try Vital Life Nutrionals Policosanol Extra Strength capsules (made with the same formula used in the clinical studies) Limited Time Offer. Save up to 40%!