How to cure heart disease with exercise.

How to Cure Heart Disease with Exercise!

Is it really possible to cure heart disease with exercise? You bet!

Dr. Kenneth Cooper a doctor of medicine and former Air Force Colonel from Oklahoma, who introduced the concept of aerobics was the first to realize that it's possible to cure heart disease with exercise.

The trail blazing doctor, researcher, author and founder of the renowned Cooper Clinic and Research Center in Dallas, Texas, was widely criticized in1968 for recommending that people over 40 should start a regular exercise program to lower risk of heart disease and a heart attack. It was considered "too dangerous" at the time.

In the early 70's he was the first to propose using exercise as a foundation for an active cardiac rehabilitation program. His detractors called the idea "the height of stupidity" that exercise plays a big part in curing heart disease.

Will you be active and use exercise to cure heart disease or are you to drifting down the slippery slide toward decrepitude.

There is a saying that, "Exercise doesn't make us live longer. It only seems like it."

The truth is that exercise, in the right amount and intensity, just might cure your heart disease, and as a bonus give you a sharper brain. It will also keep us from developing "love handles" and surplus belly fat.

It will also have a dramatic positive effect on how long we stay independent.

Walter M Bortz, M.D., researcher and heart specialist, gives solid evidence that the decline in function for persons who maintain a healthy active lifestyle occurs at only one-half percent per year.

In contrast, sedentary people age at the rate of about 2% per year...and sadly many spend their last few years with heart disease and in a frail unhealthy condition.

But it doesn't have to be so. Dr Bortz describes loss of function as frailty. "It is critical to observe that frailty is not aging--even 90 year-olds can recapture lost vigor with an exercise program."

Here's some food for thought when considering whether you can cure heart disease with exercise. A study of 100 men and women with an average age of 87 years was conducted by Tufts University researchers in Boston.

About one-third of the participants were in their 90s and some were over 100 years if age. They suffered from arthritis, high blood pressure, diabetes and other "normal" ailments.

After just a few weeks these people were able to get around more quickly, climb stairs better, and some were even able to put away their walkers!

The Power of Intensity in a Fitness Exercise Program

A high quality exercise program has three key exercise variables.
It is known as the FIT Principle:

Intensity has the most powerful effect. 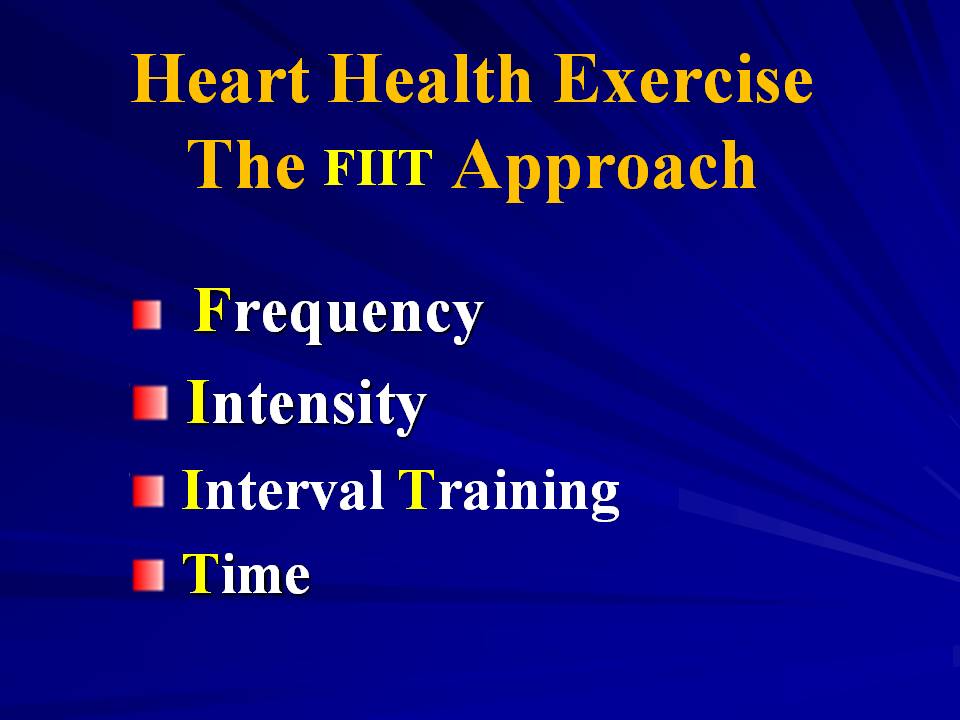 Your body responds to a fitness exercise program with short bursts of intensity by releasing a cascade of fat-mobilizing hormones and anti-aging growth hormones that supercharge your metabolism and burn extra calories for 24 hours or longer.

The best part however is that the benefits of this fitness exercise proram were achieved with as little as nine minutes per day of vigorous activity.

We understand that some of our readers would love to be more active and involved in exercise, but are just not able because of physical limitations or medical conditions.

But just maybe you can do more than you think. Often a few sessions with a physical therapist can get you on the road to becoming more active.

"People have an unduly negative attitude about what can be done to improve our physical condition and health", said the study's director, Dr. Maria Fiatarone. "We need to be more optimistic." Dr. Fiatarone hit the nail right on the head. Our attitudes and beliefs play a huge role in determining if we can cure heart disease with exercise.

We also know that it is possible to maintain a high level of fitness and begin to cure heart disease with exercise right in the privacy of your own home. And it can be a lot easier than you may think.

An old proverb says, "The best time to plant a tree is 20 years ago. The second best time is today." Don't wait until all the lights turn green...everything will never be "just right" to begin your

Busyness ranked as one of my all-time favorite excuses...until the heart surgeon sawed open my chest and stitched in bypasses to six of my favorite arteries. Obviously I wasn't interested in knowing how to cure heart disease with exercise! 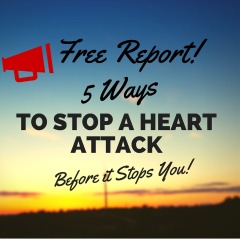